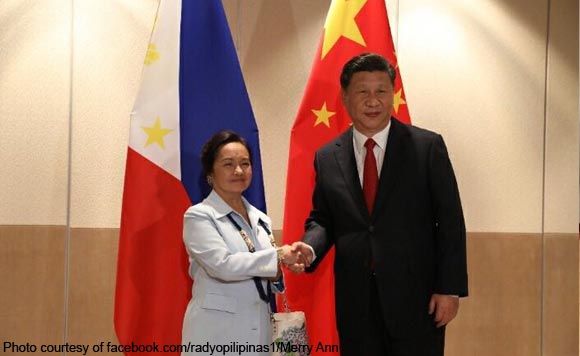 House Speaker Gloria Macapagal-Arroyo met Wednesday with Chinese President Xi Jinping, along with some legislators and Philippine government officials, before the foreign leader ended his two-day state visit in the country.

In her remarks at the start of the 30-minute meeting, Arroyo, the country’s former President and currently Pampanga 2nd District Representative, impressed upon the Chinese leader the value of improved Philippine-China relations, which, she notes, was achieved during President Rodrigo Duterte’s incumbency.

“The all-around cooperation between China and the Philippines over the past two years has been very good indeed; perhaps, as good as it has ever been,” Arroyo told Xi.

Citing the numerous agreements signed and exchanged yesterday in Malacanang Palace after Duterte and Xi held their expanded bilateral meeting, Arroyo told the Chinese leader, “We thank you for your generous support to our development.”

She said that since the Philippines will embark on a major infrastructure investment in the coming years, China’s “track record and capability in this area” makes the China-Philippines relations very important.

Politiko would love to hear your views on this...
Spread the love
Tags: Chinese Pres. Xi, House Speaker, legislators, Philippine government officials, President Xi Jinping, Speaker Gloria Macapagal-Arroyo
Disclaimer:
The comments posted on this site do not necessarily represent or reflect the views of management and owner of POLITICS.com.ph. We reserve the right to exclude comments that we deem to be inconsistent with our editorial standards.