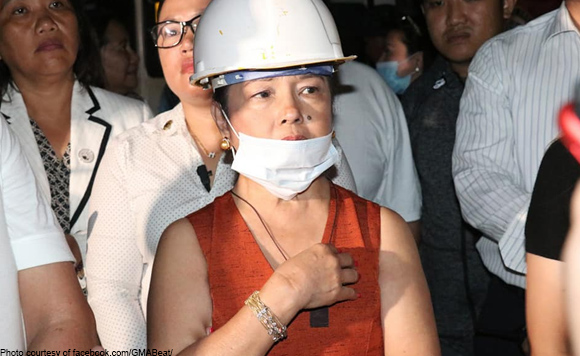 MANILA – House Speaker Gloria Macapagal Arroyo cut short her participation in the first Boao Forum for Asia Conference in Manila on Monday to assess the ongoing rescue operations in her bailiwick in Pampanga following the magnitude 6.1 earthquake that hit Central Luzon.

Arroyo, who spearheaded the forum, left Shangri-La at The Fort in Taguig City were the said event took place to see the ongoing search and rescue efforts in the areas affected by the earthquake in her province particularly in the collapsed Chuzon Supermarket in Porac, wherein there were still reported trapped persons inside the rubbles.

“I was very sad. I was specifically concerned about the Chuzon Supermarket because the four floors had collapsed and there might be other people trapped [aside from the reported deaths],” said Arroyo.

The House leader noted that businessman Manny Pangilinan who also heads the Philippine Disaster Relief Foundation told her that he is sending of group of trained miners from PHILEX Mining in the destroyed shopping store to help in the extricating the remaining trapped individuals.

Going around her district until 1 a.m., the former chief executive also went to visit those injured in different hospitals as well as one of the fatalities in Porac.

She also coordinated with different agencies and the private sector to make sure all the needs of the province and its people are addressed.

Politiko would love to hear your views on this...
Spread the love
Tags: Asia Conference, Boao Forum, Central Luzon, Chuzon Supermarket, Gloria Macapagal-Arroyo, Manny Pangilinan, PHILEX Mining, Philippine Disaster Relief Foundation, Porac, Shangri-La, Taguig City
Disclaimer:
The comments posted on this site do not necessarily represent or reflect the views of management and owner of POLITICS.com.ph. We reserve the right to exclude comments that we deem to be inconsistent with our editorial standards.