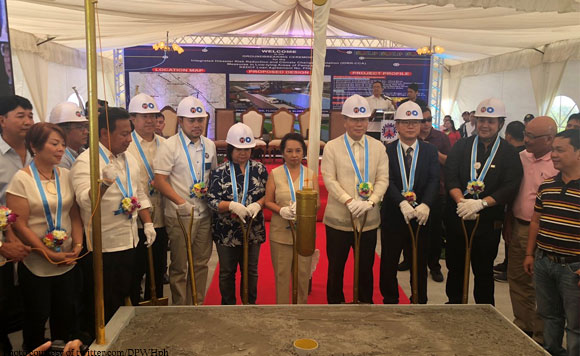 House Speaker Gloria Macapagal-Arroyo led Tuesday the groundbreaking of a flood mitigation project worth P4.776 billion in her home province of Pampanga.

The Integrated Disaster Risk Reduction and Climate Change Adaptation (IDRR-CCA) Measures in Low-Lying Areas of Pampanga Bay aims to improve drainage efficiency of the river channel network in the province through excavation and dredging at the river mouth of Pampanga River in the southernmost part of the province, as well as improvement of flow and efficiency in the portion of Caduang Tete River and Sapang Maragul River.

Three new bridges and five footbridges will be constructed also, and eight sluice gates and 164 fish pond gates will be built as additional flood control measure, according to the Department of Public Works and Highways.

The project, which is scheduled for full completion by March 2022, will be funded through a loan from South Korea’s Korean Export-Import Bank.

It is foreseen to benefit the flood-prone towns of Macabebe, Masantol, Minalin, Sto. Tomas, and Apalit, DPWH Secretary Mark Villar said in a statement.

Arroyo, in a separate statement, said the project will lessen flooding incidents, fasten draining of floodwaters, less distraction of trade and commerce, and less occurrence of waterborne diseases.

Noting that funding for the project was requested during her presidency, approval was granted during the term of former President Benigno Aquino, and realization is under the leadership of President Rodrigo Duterte through its “Build, Build, Build” program, Arroyo said, “The project that we are launching today is perfect proof that if we are all united across administrations and within administrations, we can do so much for the good of the people of Pampanga and the Philippines.”

Arroyo was president from 2001 up to 2010, and is currently completing her third term as Pampanga 2nd District Representative in Congress.(END)

Politiko would love to hear your views on this...
Post Views: 2
Spread the love
Tags: Caduang Tete River, House Speaker Gloria Macapagal-Arroyo, Integrated Disaster Risk Reduction and Climate Change Adaptation (IDRR-CCA), Macabebe, Mark Villar, Masantol, Minalin, Pampanga River, Sapang Maragul River, Sto. Tomas
Disclaimer:
The comments posted on this site do not necessarily represent or reflect the views of management and owner of POLITICS.com.ph. We reserve the right to exclude comments that we deem to be inconsistent with our editorial standards.