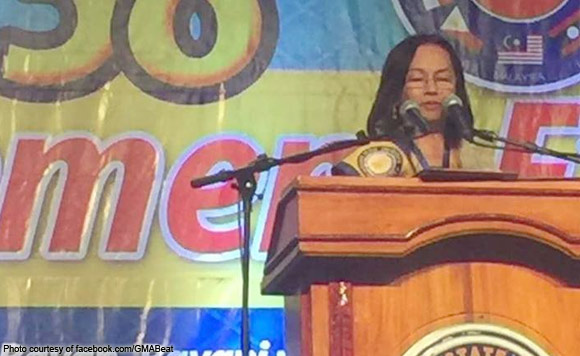 Pampanga 2nd District Representative Gloria Macapagal-Arroyo during her commencement speech at the Pangasinan State University last week said investing in human infrastructure through education is the best resource of the country.

The Pampanga politiko said this was the priority of her administration when she was president as well as that of President Rodrigo Duterte.

“President Duterte has ordered free tuition for students in selected tertiary education schools, including PSU, because our human infrastructure is the country’s best singular resource and education is very high in our value ladder,” Arroyo said.

Arroyo added that government builds more infrastructure to “create he environment conducive to investments that will provide jobs for you when you get out of school.”

“Our country can prosper and people’s living condition are improved only if new jobs are created by the proper investment environment, major of which is adequate human and physical infrastructure,” she added.

Politiko would love to hear your views on this...
Spread the love
Tags: Pampanga, Pangasinan State University, president Rodrigo Duterte, Representative Gloria Macapagal-Arroyo
Disclaimer:
The comments posted on this site do not necessarily represent or reflect the views of management and owner of POLITICS.com.ph. We reserve the right to exclude comments that we deem to be inconsistent with our editorial standards.