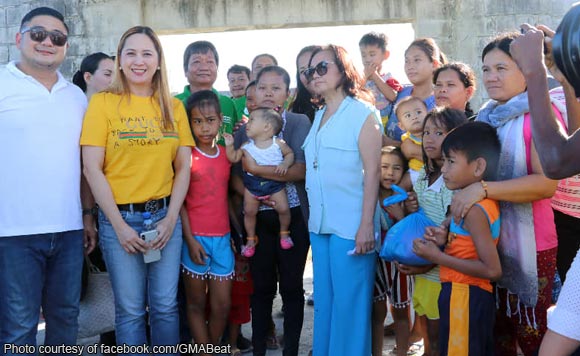 House Speaker Gloria Macapagal-Arroyo visited Porac town in Pampanga on Thursday to inspect a road project and give groceries to residents.

According to a post Saturday on her Facebook page, Arroyo “conducted inspection of her road project in Brgy. Mitle in Porac, Pampanga which she hoped would entice more residents to go back to the barangay they abandoned when Mt. Pinatubo erupted and buried it in lahar in 1991.”

The former president, who is currently Pampanga 2nd District Representative, then gave bags of groceries to residents “to bring Chirstmas cheer.”

According to the Facebook post, Arroyo conducts inspection of her projects in her district in Pampanga when the House of Representatives is not in session.

Arroyo will bow out of politics next year when she completes her three consecutive terms in Congress.(END)

Politiko would love to hear your views on this...
Post Views: 4
Spread the love
Tags: House of Representatives, House Speaker Gloria Macapagal-Arroyo, Member Olga Frances David Dizon, Pampanga, Porac town, Porac Vice Mayor Dexter Albert David
Disclaimer:
The comments posted on this site do not necessarily represent or reflect the views of management and owner of POLITICS.com.ph. We reserve the right to exclude comments that we deem to be inconsistent with our editorial standards.