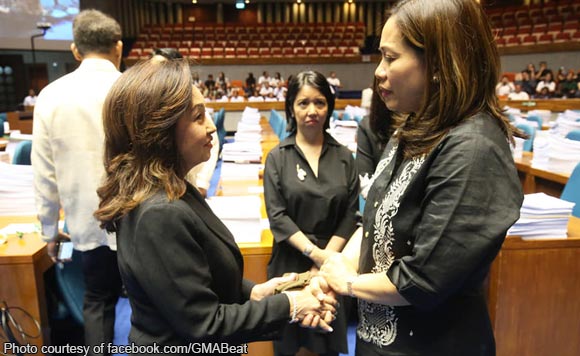 She described Batocabe’s death as “a shock” to the members of Congress “both in its suddenness and in the manner by which he was taken away from us.”

In her eulogy for the slain abogado on Monday, Arroyo offered her heartfelt condolences and prayers to Batocabe’s family as she gave kind words to her late colleague.

“All of us recall Rodel to be a bubbly fellow. On the other hand we have heard our eulogists, we have seen in the video what a daring man he was. The Daragueno Who Dared. He dared to confront the evil in Daraga at the cost of his life,” said Arroyo.

“Here in the physically safer halls of Congress, he was also daring in the advocacies that he pursued. He manifested his fearlessness in the vigor by which he pursued his ideas and convictions. Others who have spoken earlier have mentioned the great passion and brilliance with which he conveyed his ideas, whether they were interpellation arguments, interpellation questions, sponsorships or manifestations, or his opinion on an issue,” she added.

Politiko would love to hear your views on this...
Spread the love
Tags: AKO Bicol, Congress, Gloria Macapagal-Arroyo, Rodel Batocabe
Disclaimer:
The comments posted on this site do not necessarily represent or reflect the views of management and owner of POLITICS.com.ph. We reserve the right to exclude comments that we deem to be inconsistent with our editorial standards.