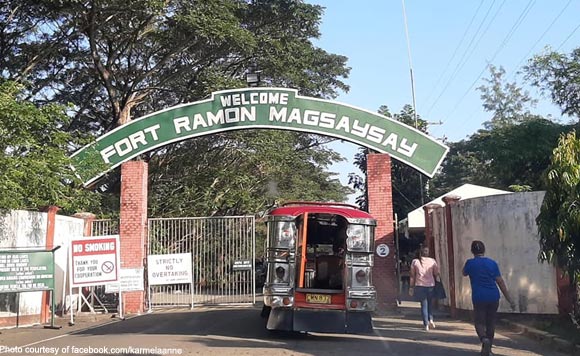 The Philippine Army’s 7th Infantry Division (7ID) which manages this vast military reservation, is open to a proposal to make a portion of the Mega Drug Treatment and Rehabilitation Center (DATRC) here as quarantine area for repatriates from China.

“Being with the Armed Forces of the Philippines, we will have to obey whatever is the decision of the national government for the better good of our countrymen,” said Maj. Gen. Lenard Agustin, commander of the 7ID.

Agustin and his staff met on Saturday with health officials, led by Department of Health’ (DOH’) Regional Director, Dr. Cesar Cassion who headed the inspection of the proposed area for quarantine activity.

Agustin said they proposed buildings at the fourth phase area, which is located at the back portion of the DATRC.

He said such portion is around one- fourth of the DATRC which can accommodate some 2,500 based on drug rehabilitation usage plan.

Agustin allayed fears of contamination, saying no persons with manifested 2019-nCov symptoms will be quarantined in the place based on their briefings.

“Nothing to be apprehensive about,” he said.

Agustin said the Chinese government will not allow people who manifested illness to leave their country.

“Pag okay (If it’s okay), the Chinese government will give the go signal for our government to haul our countrymen there,” he said.

Putting them in 14-day quarantine is only meant to erase further doubt.

“So, huwag tayong matakot dun (do not be afraid on that),” he said.

Agustin further said DATRC is only one of five choices to be a quarantine area. (PNA)

Politiko would love to hear your views on this...
Spread the love
Tags: Army, mega drug rehab, Philippine Army's 7th Infantry Division, quarantine site
Disclaimer:
The comments posted on this site do not necessarily represent or reflect the views of management and owner of POLITICS.com.ph. We reserve the right to exclude comments that we deem to be inconsistent with our editorial standards.