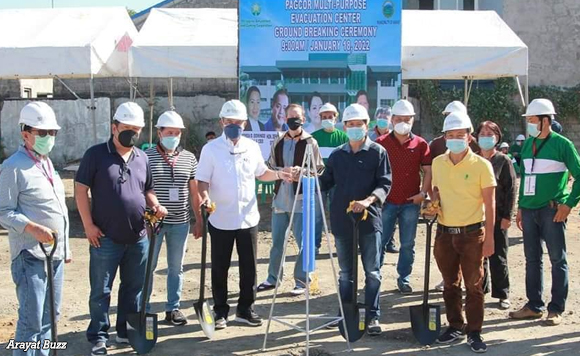 Officials of Arayat town in Pampanga province extended their thanks to the Philippine Amusement and Gaming Corporation (Pagcor) for funding a two-story multi-purpose evacuation center.

Officials broke ground on Tuesday for the brand new facility to be constructed near the Municipal Hall compound in Barangay Plazang Luma.

Arayat Mayor Emmanuel Alejandrino said Pagcor provided the P50-million fund for the construction of the infrastructure, while the local government allocated P6 million as its counterpart fund.

The donation is part of Pagcor’s program on long-term response to climate change, which causes prolonged flooding, especially in disaster-prone areas.

Alejandrino expressed gratitude to Pagcor for choosing Arayat as one of its beneficiaries in its disaster-mitigation program.

“Pagcor is not only providing an infrastructure but a safe space for our residents during times of calamities, especially that we are at the foot of Mt. Arayat,” he said.

Politiko would love to hear your views on this...
Spread the love
Tags: Arayat, Evacuation Centers, Pampanga, Philippine Amusement and Gaming Corporation (Pagcor)
Disclaimer:
The comments posted on this site do not necessarily represent or reflect the views of management and owner of POLITICS.com.ph. We reserve the right to exclude comments that we deem to be inconsistent with our editorial standards.