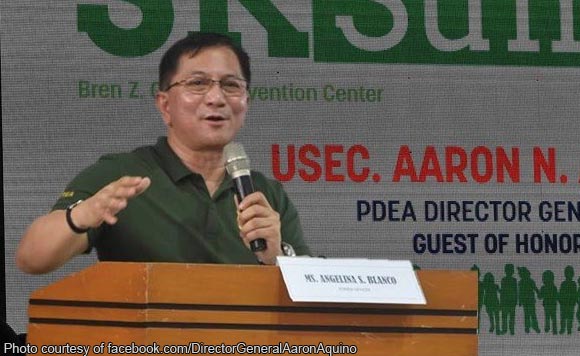 The Philippine Drug Enforcement Agency (PDEA) has urged the Sangguniang Kabataan (SK) officials in Pampanga to focus more in organizing anti-drug advocacy programs instead of basketball tournaments and beauty pageants.

PDEA Director General Aaron N. Aquino made the call during Pampanga Governor Lilia Pineda-sponsored SK Summit at Bren Guiao Convention Center in San Fernando City on August 2 and was attended by some 8,000 youth officials in the province.

“SKs has a 10% annual budget from the barangay funds that can be used for the implementation of anti-drug advocacy programs in their community,” said Aquino.

He disclosed that PDEA is mulling to create a uniform anti-drug advocacy program for the SK nationwide.

Aquino said the SK officials can use the different social media platforms in disseminating correct information to the youth.

“They can discourage young people from using illegal drugs and educate them on the harmful impact of this industry to an individual and to the society as a whole,” he said, adding that youth leaders are also role models in their respective barangays, municipalities and cities.

“We dream to have a country that is free of drug menace. We want to put an end to the killings and the criminality brought about by the illegal drug industry. We dream of a nation with proud and rich culture untainted by anomalies, corruption, greed and crime. We encourage you to share this dream and start putting it into reality,” Aquino added.

Politiko would love to hear your views on this...
Spread the love
Tags: Bren Guiao Convention Center, Governor Lilia Pineda, Pampanga, Philippine Drug Enforcement Agency, San Fernando City, Sangguniang Kabataan
Disclaimer:
The comments posted on this site do not necessarily represent or reflect the views of management and owner of POLITICS.com.ph. We reserve the right to exclude comments that we deem to be inconsistent with our editorial standards.