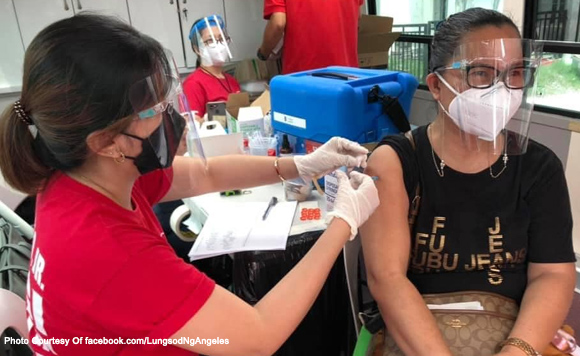 The Angeles City government received praise from the National Vaccination Operation Center for its high inoculation rate, vaccinating 9,800 residents in one day.

Lazatin’s Chief Adviser IC Calaguas, also the chief implementer of the city government’s vaccination program, has requested the NVOC to allocate Angeles City 30,000-40,000 vials a week for the first dose of vaccination of Angeleños.

“With the roll-out in barangays and the on-site vaccination in the City College of Angeles and Angeles City National High School, mas napapabilis po ang ating pagbabakuna. Records show that we can accommodate up to 9,800 Angeleños in a day,” she said.

Politiko would love to hear your views on this...
Spread the love
Tags: 1 day, 9.8K, Angeles City, jab rate, praised, received, vaccinees
Disclaimer:
The comments posted on this site do not necessarily represent or reflect the views of management and owner of POLITICS.com.ph. We reserve the right to exclude comments that we deem to be inconsistent with our editorial standards.