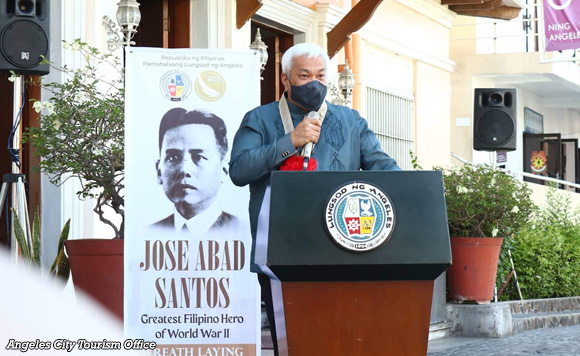 The ceremony was held in front of Museo ng Angeles on May 7, where the erected monument for the World War II martyr stands tall.

Lazatin said the heroism of Abad Santos should serve as an inspiration for both the front liners and Angeleños to continue working together amidst the pandemic.

May 7 was declared a special non-working holiday in Angeles City and Pampanga through Republic Act 8815.

Abad Santos was a Kapampangan associate justice who used his expertise in the law to protect the people. His martyrdom lived on during World War II.

“Jose Abad Santos, a great Kapampangan hero, served as a reminder for the main essence of the law, to safeguard the Filipino people,” Lazatin said.

Politiko would love to hear your views on this...
Spread the love
Tags: Angeles City, former Chief Justice Jose Abad Santos, Mayor Carmelo Lazatin Jr.
Disclaimer:
The comments posted on this site do not necessarily represent or reflect the views of management and owner of POLITICS.com.ph. We reserve the right to exclude comments that we deem to be inconsistent with our editorial standards.