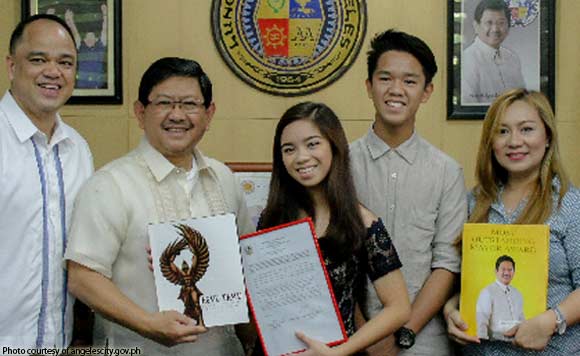 She paid a courtesy visit to the city mayor on April 17 at the Angeles City Hall.

Vice Mayor Bryan Nepomuceno then handed over the city council resolution citing Bautista as an Angeleño pride “beating more than 1,000 females who auditioned for the said coveted role.”

Bautista, who hails from Barangay Capaya, is the second Angeleño to play the role after acclaimed actress Lea Salonga.

“This is quite nostalgic since an Angeleña again will be playing Miss Saigon’s lead role. It seems that Angeleña qualities best fit the requisites of the said coveted role,” said Pamintuan.

Politiko would love to hear your views on this...
Spread the love
Tags: Angeles City, Barangay Capaya, Joreen Moriah Bautista, Miss Saigon, United Kingdom
Disclaimer:
The comments posted on this site do not necessarily represent or reflect the views of management and owner of POLITICS.com.ph. We reserve the right to exclude comments that we deem to be inconsistent with our editorial standards.