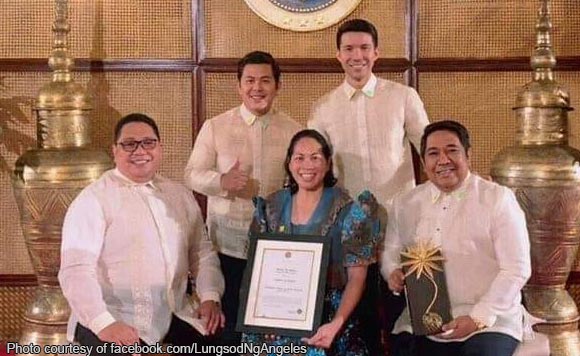 The Presidential citation and Philippine Heritage Award were presented to the city government of Angeles under the Heritage Program Support Category, “in recognition of its exemplary work and contributions in the area of heritage preservation and conservation efforts through its Cultural Renaissance of Angeles City Program.”

The citation noted that the local government’s program “provides a long-term sustainable vision and blueprint for the local government, non-governmental organizations, religious institutions, private entities and members of the community to successfully collaborate in protecting and preserving heritage sites and infrastructure.”

The event was held at Malacanang Palace, with President Rodrigo Duterte conferring the awards together with National Commission for Culture and the Arts Chairman Virgilio Almario and Executive Secretary Salvador Medialdea.

The Philippine Heritage Awards was among four awards given out. The three others are the National Artist Award, the National Living Treasures, and the Presidential Medal of Merit.

It is the first time that the NCCA is presenting the Philippine Heritage Awards as it recognizes special achievements and important contribution and services in the area of heritage preservation and conservation efforts, in accordance with the National Cultural Heritage Law.

On his Facebook page, exclaimed, “To God be all the Glory!” as he shared screenshots of his and Nepomuceno’s appearance on the RTVM coverage of the event.

Politiko would love to hear your views on this...
Spread the love
Tags: Angeles City, Bryan Matthew Nepomuceno, Pampanga, Philippine Heritage Awards, Rodrigo Duterte, Virgilio Almario
Disclaimer:
The comments posted on this site do not necessarily represent or reflect the views of management and owner of POLITICS.com.ph. We reserve the right to exclude comments that we deem to be inconsistent with our editorial standards.