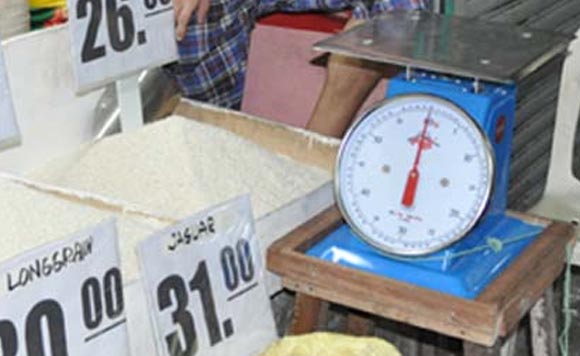 The city government of Angeles in Pampanga recently launched a crackdown on defective weighing scales at the city’s main public market that resulted in the confiscation of 57 devices.

In a surprise inspection last Aug. 17, Jesus Quinto, supervising officer of the City Mayor’s Clearing Operations Group, “observed that most of the weighing scales are faulty, and are being used by some vendors to trick their customers,” a statement by the city government said.

Quinto, who led the inspection Task Force, was joined by representatives from the city’s Business Permit and Licensing Division (BLPD), Department of Trade and Industry, and the Philippine National Police.

The operation was aimed at guaranteeing “that the weighing scales used by market tenants are in good working condition, and to ensure that market patrons are getting what they pay for.”

Evangeline Malonzo, chief of the BLPD, said some of the confiscated weighing scales will be returned to the owners after recalibration, tagging and sealing by the City Treasurer’s Office.

The totally defective devices, however, will be disposed of by the city government.

Politiko would love to hear your views on this...
Spread the love
Tags: Angeles, Business Permit and Licensing Division, City Treasurer’s Office, Evangeline Malonzo, Jesus Quinto, Pampanga, Philippine National Police
Disclaimer:
The comments posted on this site do not necessarily represent or reflect the views of management and owner of POLITICS.com.ph. We reserve the right to exclude comments that we deem to be inconsistent with our editorial standards.