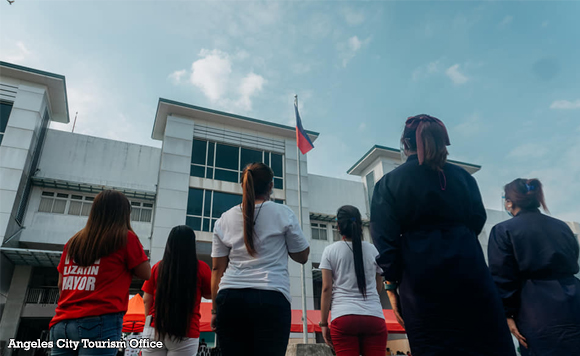 The Angeles City government observes the National Flag Day on Friday by urging city residents to “stop and salute” the Philippine flag.

“This annual commemoration aims to build love and respect for the country, starting with the advocacy of proper and abundant display of the Philippine flag across the city,” Angeles City Mayor Carmelo Lazatin Jr. said.

In a statement, the mayor said this year’s observance was in partnership with the National Historical Commission of the Philippines (NHCP) and the Salute to a Clean Flag movement.

As part of the celebration, he said Philippine flags were displayed and installed within the premises of the City Hall offices, off-site offices, and throughout the city.

In addition, Independence Day lanterns were also put up around the city’s major thoroughfares.

City Tourism Officer-in-Charge Anneleen Antonio-Sugui said that the city government will continue to provide programs that will nurture our history and culture.

“In fact, the city government is dedicating the upcoming celebration of the 123rd Philippine Independence Day on June 12 in honor of the city’s health workers, frontliners, and backliners fighting the Covid-19 pandemic,” she said.

Politiko would love to hear your views on this...
Spread the love
Tags: Angeles City, Angeles City government
Disclaimer:
The comments posted on this site do not necessarily represent or reflect the views of management and owner of POLITICS.com.ph. We reserve the right to exclude comments that we deem to be inconsistent with our editorial standards.