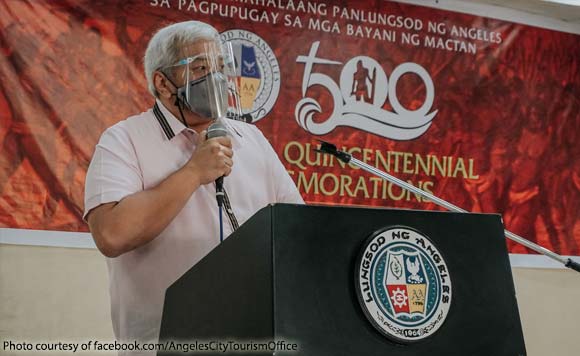 Angeles City Mayor Carmelo Lazatin Jr. on Tuesday led city officials in commemorating the 500th anniversary of the Victory of the Battle of Mactan.

“This historic victory has always signified the unmatched bravery of the Filipino race who stood up against foreign aggressors,” Lazatin said in a press release.

“Part of this commemoration is also the introduction of Christianity in the Philippines, and the role of the country in the first circumnavigation of the world,” Vice Mayor Vicky Vega-Cabigting said.

“And this is something that we should always remember and be proud of,” she said.

Lazatin, in his message during the flag raising ceremony, emphasized the role of health workers as “modern-day heroes” in the fight against Covid-19.

“Just like the victory at Mactan 500 years ago, we too have our own version of modern-day-heroes – our health workers and front liners who tirelessly do their duties in the service of their fellowmen, while staring in the face of death everyday,” he said.

Politiko would love to hear your views on this...
Post Views: 7
Spread the love
Tags: Angeles City, Battle of Mactan, Mayor Carmelo Lazatin Jr.
Disclaimer:
The comments posted on this site do not necessarily represent or reflect the views of management and owner of POLITICS.com.ph. We reserve the right to exclude comments that we deem to be inconsistent with our editorial standards.