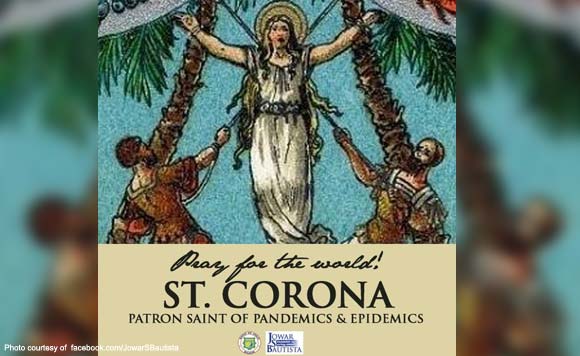 Apparently, there is a Saint Corona and she is known to be the patron saint of pandemics and epidemics. Her remains are buried at a basilica in Anzu, Northern Italy which is coincidentally the current epicenter of COVID-19.

At age 15, she married a Roman soldier who did not know she was Catholic. It was discovered when she saved San Victor when he was being tortured. She kneeled in front of San Victor and prayed for him—an action that led to her own torture and imprisonment and eventual death.

Politiko would love to hear your views on this...
Spread the love
Tags: Angat Vice Mayor Jowar Bautista, Anzu, Covid-19, Northern Italy, Roman Emperor Marcus Aurelius
Disclaimer:
The comments posted on this site do not necessarily represent or reflect the views of management and owner of POLITICS.com.ph. We reserve the right to exclude comments that we deem to be inconsistent with our editorial standards.