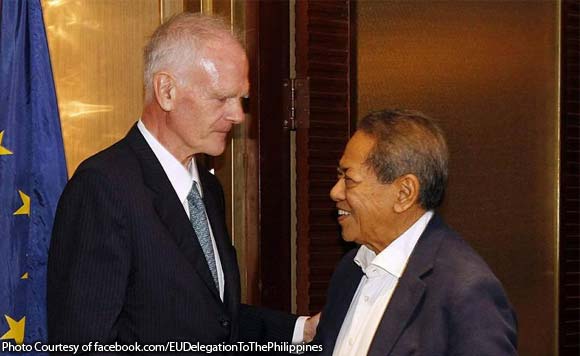 Angara, who hailed from Baler, Aurora, was President Rodrigo Duterte’s special envoy to the EU.

“I am saddened to hear that Senator Ed Angara, a statesman and a good friend, has passed away,” Jessen said Sunday, May 13.

“My thoughts and prayers are with his family. Ed was a great patriot and a true friend of the EU,” he added.

Angara, who was appointed as special envoy to EU in May last year, passed away on Sunday. He was 83.

He played an important role in the relationship between the Philippines and EU in the wake of Duterte’s strong statements against the regional grouping.

There was a point in time when Duterte told the EU members that they were free to cut ties with the Philippines after some members of its Parliament criticized the government’s bloody war on illegal drugs.

Politiko would love to hear your views on this...
Post Views: 0
Spread the love
Tags: Ambassador Franz Jessen, Aurora, Baler, European Union, former Senator Edgardo Angara, illegal drugs, Parliament criticized, president Rodrigo Duterte
Disclaimer:
The comments posted on this site do not necessarily represent or reflect the views of management and owner of POLITICS.com.ph. We reserve the right to exclude comments that we deem to be inconsistent with our editorial standards.