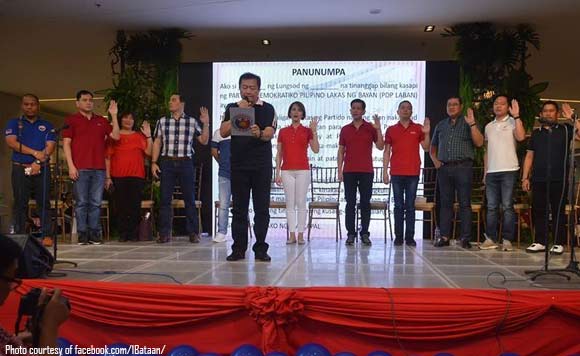 In his message, Governor Abet Garcia expressed in behalf of the mayors and barangay officials who attended the event that Bataan officials are in full support of President Rodrigo Duterte.

Garcia was especially grateful to the present administration for providing the for free college education and free irrigation services to Bataan farmers. He also lauded the “Build, build, build” program of the President, which he said will bring more investments and employment opportunities to the province.

Rep. Garcia, meanwhile, announced that the proposed house bill on the new special economic zone for the Defense Industry in the government arsenal in Limay was already approved, which aims to enhance the performance of the Freeport Area of Bataan.

Politiko would love to hear your views on this...
Tags: 1st District Rep. Geraldine Roman, 2nd District Rep. Joet Garcia., Bataan, Freeport Area of Bataan, Governor Abet Garcia, House Speaker Pantaleon Alvarez, PDP-Laban party., president Rodrigo Duterte, Vice Governor Cris Garcia, Vista Mall in Balanga City
Disclaimer:
The comments posted on this site do not necessarily represent or reflect the views of management and owner of POLITICS.com.ph. We reserve the right to exclude comments that we deem to be inconsistent with our editorial standards.