All set for Pampanga’s Giant Lantern Festival on Dec. 15 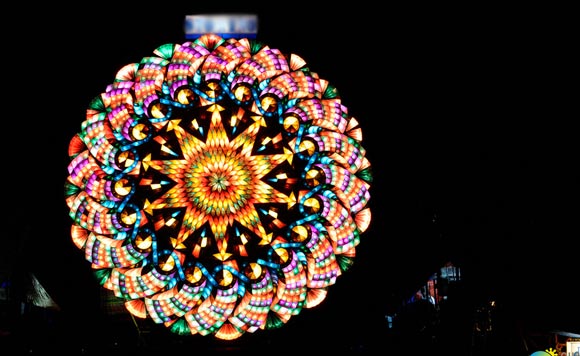 All is set for this year’s Giant Lantern Festival in this city, dubbed as the country’s “Christmas capital,” to be held at the Robinsons Starmills on December 15.

Locally known as “Ligligan Parul,” a total of 11 villages in this city will compete for this annual festival that is seen to again draw thousands of local and foreign spectators.

Mayor Edwin Santiago said they will enforce tighter security measures for this year’s edition of the festival to ensure peace and order and public safety during the entire event.

“We will strictly monitor the situation especially that more tourists are expected to come and watch the festival this year,” Santiago said.

What makes the festival famous locally and internationally is the spectacular display of lights and designs of lanterns vying to win the coveted title of the “brightest star” of the night.

Behind the shimmering success of this annual are the artistic and innovative Kapampangan lantern makers.

The exquisite intricacy and meticulous details of making the giant lanterns is indeed a demonstration of craftsmanship and passion of the lantern makers.

A giant lantern — with standard size of 20 feet in height — is mainly made of thousands of colorful bulbs intertwined in wires.

The spectacular play of these lights is done manually through a Kapampangan innovation called “rotor.”

Barangay Dolores which has been the champion for four consecutive years since 2014 will no longer join the competition this year to give the other contenders a chance.

Last year’s first runner-up, Barangay San Jose, is confident that it will clinch the title this time.

The village’s lantern maker this year is a woman, the first in the history of the Giant Lantern Festival.

Maryanne Sason Torres, 35, in a television interview, admitted to becoming a bit pressured considering the high expectation from her.

“I am thankful for the trust given to me by our barangay officials, although I can feel the pressure,” said Torres, whose late father was also a lantern maker.

Lantern makers of Barangay Calulut, are, however, also optimistic about bringing home the coveted title this year. They finished first runner-up in 2016.

Councilor Resty Vergara of Barangay Calulut said they tapped the services of veteran and champion lantern maker Teddy Aguilar in making their giant lantern which is made of some 8,000 colorful light bulbs.

The Giant Lantern Festival finds its roots in Bacolor town. Following the transfer of the provincial capital from Bacolor to San Fernando in August 1904, the lantern event followed as well.

“Ligligan Parul” was said to have started in San Fernando in 1904, but some say it was not staged immediately after the transfer and in fact, began in 1908.

The festival used to be part of the religious activity “Lubenas,” a nine-day novena before Christmas, which coincided with the “Simbang Gabi” from December 16-24.

The lanterns were brought around each village in procession then would make their way to the town church before the midnight mass on Christmas Eve.

This tradition gradually evolved as the lanterns became bigger and the designs more intricate.

From the “papel de japon,” the lanterns were soon wrapped in sheets made of capiz, plastic vinyl, handmade paper composed of grass and the latest, fiberglass.

Since then, the craftsmanship of the Kapampangans in making Christmas
lanterns became known globally.

The lanterns were also used as decorations in various international exhibits, competitions and events.

To preserve the traditional lantern festival and to sustain the growth of the lantern industry, Mayor Santiago said the local government is developing strategies to promote the lanterns and the craft of light industry not only during Christmas season but also all-year round.