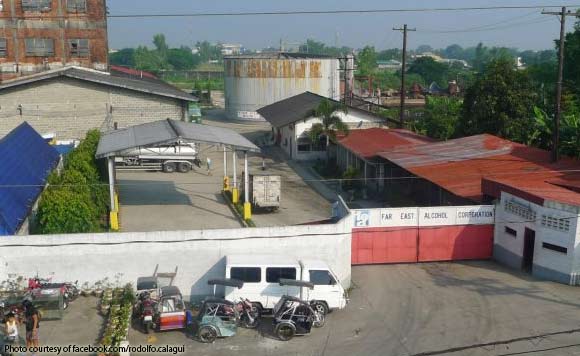 The local government of Apalit in Pampanga has imposed a 30-day suspension of an alcohol fermentation plant that allegedly caused the fish kill in the towns of Macabebe and Masantol.

Apalit Mayor Peter Nucom ordered the suspension of business permit of the Far East Alcohol Corporation (Feaco), after receiving information that the company has been discharging waste water into the river.

The molassed allegedly poisoned fish and other sea creatures in Pampanga River which were seen floating the next day.

According to the local government, Feaco did not report the leaks to them or to any government agency.

Danting said Nucom castigated Feaco for not reporting the leaks to the local government or any other concerned agencies that can provide intervention to avoid any unfortunate incident.

The Masantol Municipal Disaster Risk Reduction and Management Office has yet to confirm the “fish kill.” The office is awaiting results conducted by the Bureau of Fisheries and Aquatic Resources which collected water samples on Thursday morning, September 21.

Politiko would love to hear your views on this...
Spread the love
Tags: Apalit Mayor Peter Nucom, Far East Alcohol Corporation, government of Apalit in Pampanga, Macabebe, Masantol
Disclaimer:
The comments posted on this site do not necessarily represent or reflect the views of management and owner of POLITICS.com.ph. We reserve the right to exclude comments that we deem to be inconsistent with our editorial standards.