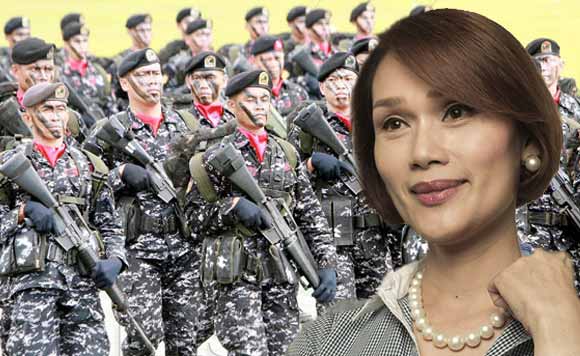 Inducting Bataan 1st District Rep. Geraldine Roman, the first ever transgender woman elected to the House of Representatives, to the reserves will not be a problem to the Armed Forces of the Philippines (AFP).

“In taking in applicants to the AFP whether in regular or reservist force, we do not discriminate with respect to gender,” he added.

“As such, the AFP welcomes the express interest of Rep Roman. We highly value the patriotism of our citizens and will work to cultivate this. She will be a welcome addition to the Reservists Force,” he added.

And before accepting and training prospective members, Arevalo said the AFP inculcates on them that that they are entering an institution placed in high esteem.

“As such, we admonish them to maintain the dignity of the uniform; observe discipline, propriety and decorum; and measure up to the steep standards of the service. Else, they have no room in this noble profession of arms,” he added.

Politiko would love to hear your views on this...
Spread the love
Tags: AFP public affairs, AFP's ongoing gender and development program, Armed Forces of the Philippines, Bataan 1st District, bisexual, certificate of live birth, Col. Edgard Arevalo, first ever transgender woman elected to the House of Representatives, gay, House of Representatives, lesbian, LGBT, Rep. Geraldine Roman, transgender, transgender woman
Disclaimer:
The comments posted on this site do not necessarily represent or reflect the views of management and owner of POLITICS.com.ph. We reserve the right to exclude comments that we deem to be inconsistent with our editorial standards.