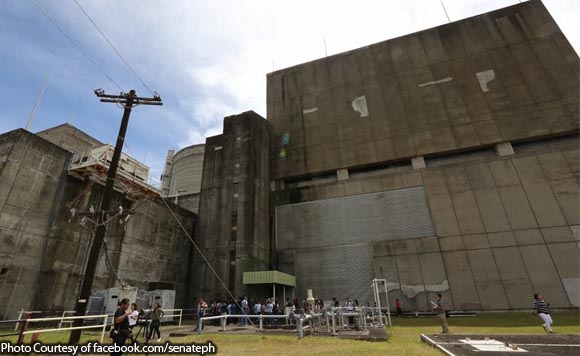 “As much as this administration would like to admit, we have much to learn from other countries, which have more advanced technologies. Mr. Speaker Pantaleon Alvarez colleagues, in 2011, 8 German nuclear power plants were shut down following the Fukushima Daiichi incident in that same year. Despite Japan and Germany’s renowned technological acumen and experience, they have began shunning nuclear energy,” the politiko said.

Firstly, Villarin said the cost of running a nuclear power plant like the BNPP is high.

“Evidence suggests that the argument that nuclear energy is cheap has already been debunked. In fact, over the years, the cost of operating a nuclear plant has gone up continuously because of the need to catch up with increasing safety regulations, as required by international standards, among others,” he added.

And in 2009, Villarin said that it was revealed that power plants similar to the BNPP have experienced difficulties, particularly three incidents involving the Gori reactor in South Korea just within two months, as well as a coolant leak in the Krsko power plant in Slovenia.

“As we all know, the BNPP model was based on a 1950s model, short of saying that this model has been outmoded,” the politiko disclosed.

Moreover, it was found that the BNPP does not conform to the safety fundamentals of the International Atomic Energy Agency, thereby increasing the risks in reviving the plant’s operations, he added.

Apart from the cost of rehabilitating the BNPP pegged at almost P50 billion, one can expect the cost of an extremely scarce, and non-renewable resource such as uranium to go nowhere but up.

And assuming without conceding that we succeed in making the BNPP operational, nuclear waste disposal has also been proven as one of the most tedious, delicate, and expensive processes in harnessing nuclear energy.

And given the hazardous nature of this type of waste, Villarin said a more sophisticated technology is required in order to minimize the risks of radioactive leaks, scavenging, and the destruction of both communities and ecosystems.

Politiko would love to hear your views on this...
Post Views: 0
Spread the love
Tags: Akbayan partylist, Bataan Nuclear Power Plant (BNPP), Duterte administration, Krsko power plant, Rep. Tom Villarin, Slovenia, Speaker Pantaleon Alvarez
Disclaimer:
The comments posted on this site do not necessarily represent or reflect the views of management and owner of POLITICS.com.ph. We reserve the right to exclude comments that we deem to be inconsistent with our editorial standards.