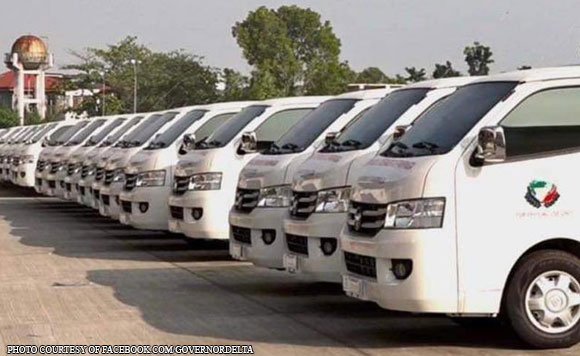 Some 95 village chiefs in Pampanga province expressed their gratitude to the provincial government after Pampanga Governor Dennis Pineda turned over to them their barangay service vehicles last week.

Palo was among the many who personally thanked the governor after the ceremonial handover of vehicles’ keys at the Bren Z. Guiao Convention Center in San Fernando City.

Echoing the views of other leaders, Solis said the vehicles would greatly help in transporting upland villagers to the lowlands during emergency and other situations.

Other beneficiaries from the far-flung areas of Masantol also thanked the governor.

According to Edwin Viray of Barangay Sta Lucia Matua in Masantol town, the service would be used by his constituents for free whenever they want to visit or bring their relatives to hospitals due to illness.

Barangays Sapang Uwak and Sta. Lucia are among the second batch of recipients of service vehicles.

The governor earlier turned over 100 service vans. A total of 310 more vehicles are set to be distributed.

Politiko would love to hear your views on this...
Spread the love
Tags: Barangay Sapang Uwak, Governor Dennis Pineda, Pampanga, Pampanga province
Disclaimer:
The comments posted on this site do not necessarily represent or reflect the views of management and owner of POLITICS.com.ph. We reserve the right to exclude comments that we deem to be inconsistent with our editorial standards.