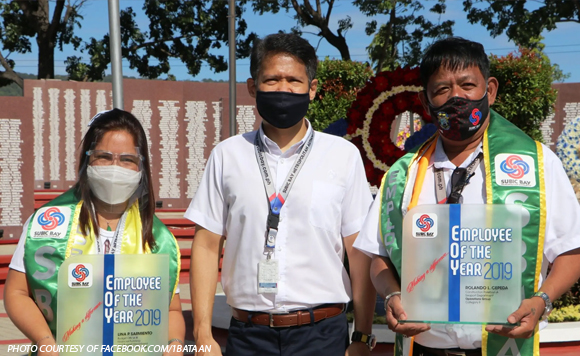 The Subic Bay Metropolitan Authority (SBMA) on Wednesday honored the contributions of some 8,000 volunteers who worked without pay to kick-start operations in the early years of the Subic Bay Freeport Zone.

During the 29th SBMA founding anniversary celebration, the agency’s chief of staff Vicente Evidente said it became the special mission of the SBMA to provide livelihood opportunities to residents of Olongapo City and nearby communities that were badly affected by the withdrawal of the US Navy from Subic in 1992, according to a Punto Central Luzon report.

“When the U.S. Navy pulled out, the whole place was devastated. Olongapo’s Magsaysay Drive, which was the center of rest and recreation for American sailors, was like a ghost town. Businesses had to close because they did not have any option,” he was quoted as saying in the report.

Evidente delivered the message on behalf of SBMA chair and administrator Wilma Eisma.

“The only option left for then SBMA Chairman Richard Gordon, was to rally the people of Olongapo to come to the Freeport, to preserve the facilities left behind by Americans, and build a new future,” he added in the report.

Evidente, who was a volunteer himself and served as an executive assistant at the Chairman’s office, said the spirit of volunteerism “mesmerized” even prospective investors and convinced them to put up businesses here.

“To this day, we commemorate the volunteers’ sacrifice—and their malasakit for Subic, our community – and we hope to continue living the culture of volunteerism that these people have started,” he said.

Politiko would love to hear your views on this...
Spread the love
Tags: chief of staff Vicente Evidente, Subic Bay Freeport Zone, Subic Bay Metropolitan Authority
Disclaimer:
The comments posted on this site do not necessarily represent or reflect the views of management and owner of POLITICS.com.ph. We reserve the right to exclude comments that we deem to be inconsistent with our editorial standards.