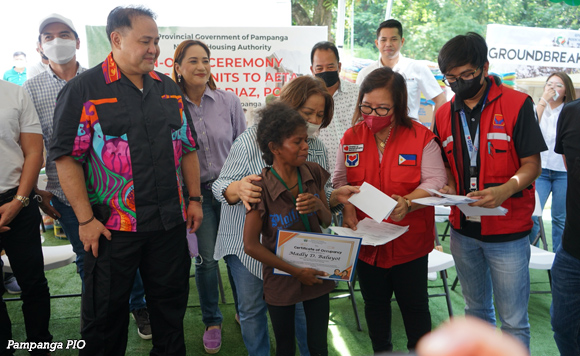 Pampanga Governor Dennis Pineda awarded certificates of housing occupancy to 77 out of 96 Aeta families displaced by the 6.1- magnitude earthquake that hit Luzon in April 2019.

Pampanga Vice Governor Lilia Pineda and Porac Mayor Jing Capil, together with officials from the National Housing Authority and Department of Social Welfare and Development, joined the governor in turning over the keys to the new houses built on a 2.8-hectare land purchased by the provincial government in Barangay Babo Pangulo from Barangay Diaz.

The Mines and Geosciences Bureau of the Department of Environment and Natural Resources and the Philippine Institute of Volcanology and Seismology of the Department of Science and Technology had declared Diaz to be “not fit for human habitation” due to large cracks following the temblor which epicenter was east of Castillejos, Zambales.

For their safety, then Governor Lilia Pineda temporarily transferred the Aetas to a lot owned by the family of Board Member Fritzie David-Dizon in Babo Pangulo.

The 37 units were built by the provincial government through funds of the provincial disaster risk reduction and management office, according to its head Angelina Blanco.

She said the 40 other units were funded on a P20-million grant from the National Housing Authority.

Politiko would love to hear your views on this...
Spread the love
Tags: Aeta, Governor Dennis Pineda, housing occupancy, Pampanga
Disclaimer:
The comments posted on this site do not necessarily represent or reflect the views of management and owner of POLITICS.com.ph. We reserve the right to exclude comments that we deem to be inconsistent with our editorial standards.