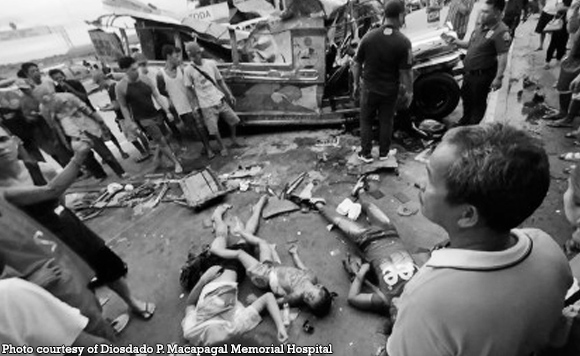 A closed-circuit television footage showed that at around 5 p.m. Wednesday, a passenger jeepney with 22 passengers was en route to the City of San Fernando when a pickup truck suddenly appeared from the other lane and hit the jeepney.

Due to the strong impact, the jeepney landed on the opposite side of the road which was rammed by an incoming fish truck.

Nine others were hurt in the accident — seven of them were rushed to Pampanga Medical Specialist Hospital and two others at Jose B. Lingad Memorial Regional Hospital in the City of San Fernando.

The passenger jeep was described as a total wreck.

Riego said that Domingo is now detained at the Lubao Municipal Police Station.