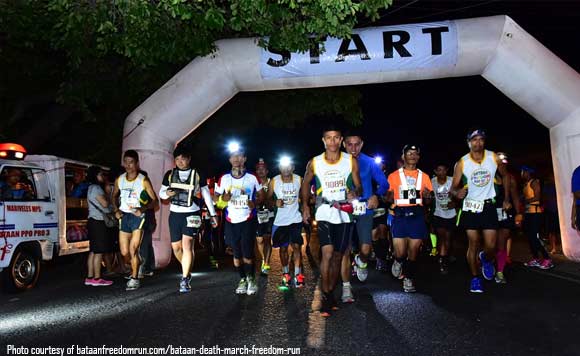 The Philippine Veteran Bank (PVB) will once again lead the upcoming Bataan Freedom Run (BFR_ and the Mariveles-San Fernando-Capas Freedom Trail, in honor of the heroism embodied by Filipino and American freedom fighters during World War II.

The activities are part of the 76th Bataan Day and in commemoration of Philippine Veterans Week.

“Philippine Veterans Bank and its partners are honored to again hold the Bataan Freedom Run and the Freedom Trail in time for the 76th Anniversary of the Bataan Death March and commemoration of Veterans Week,” said PVB chairperson Dr. Roberto de Ocampo, OBE.

“These events, which challenge runners through gruesome and gritty courses, are our way of remembering, honoring, and emulating the bravery and sacrifices of our World War II veterans during one of the darkest chapters of our country’s history,” he added.

Now in its 5th year, the BFR invites running enthusiasts to follow the route of the historic Bataan Death March through the province of Bataan beginning at Kilometer Zero in the municipality of Mariveles. The event will be held on Sunday, April 8, 2018.

Beginners and pro-runners may choose from the 42-kilometer full marathon, 21-kilometer half marathon, as well as the 10-, 5-, and 1-kilometer courses.

This year’s BFR aims to attract more participants from the military and police. Members of the United States Special Forces will also be invited to join the solo and team relays.

The Mariveles-San Fernando-CapasFreedom Trail (Freedom Trail), meanwhile, will be held onMarch 24 – 25, 2018. Participants must trace the entire route of the Bataan Death March from Kilometer Zero in Mariveles, Bataan all the way to Capas, Tarlac.