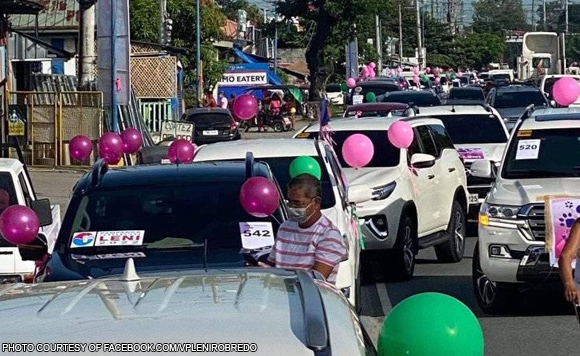 Some 500 motorists in Pampanga province joined the “pink caravan” organized by supporters of Vice President Leni Robredo on Saturday.

The event was held as a show of support for Robredo and her running mate, Senator Kiko Pangilinan.

They drove cars, jeeps, trucks, motorcycles, pedicabs and bikes decorated with pink ribbons, balloons, stickers, and tarpaulins during the caravan held simultaneously in more than 20 other provinces and cities, the organizers said.

The Pampanga participants traveled from Angeles City to San Fernando City and the towns of Mexico, Sta. Ana and Arayat.

Others showed their support by “waving pink ribbons, ties, flaglets or clothes as the fleet of vehicles passed by,” according to a Sun Star Pampanga report.

Politiko would love to hear your views on this...
Spread the love
Tags: Pampanga province, Senator Kiko Pangilinan, Vice President Leni Robredo
Disclaimer:
The comments posted on this site do not necessarily represent or reflect the views of management and owner of POLITICS.com.ph. We reserve the right to exclude comments that we deem to be inconsistent with our editorial standards.