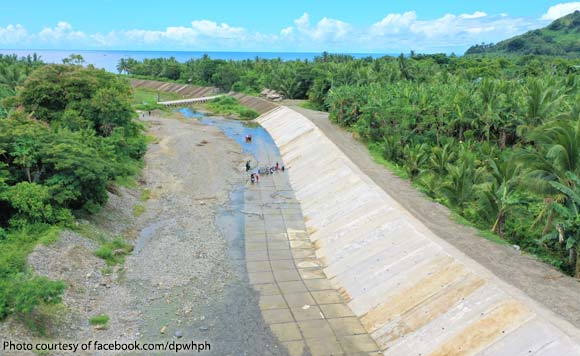 The Department of Public Works and Highways (DPWH) has completed five flood control structures in three towns of Aurora province to help protect them from heavy flooding during the monsoon season.

A total of P58.8 million was allocated from the 2022 national budget for the five projects.

In Aurora’s capital town of Baler, a 390-meter slope protection along the Duongan River section in Barangay Sabang was built to supplement the nearby 100-meter wall protection.

The structure is seen protecting the community of Sitio Vietnam with stone masonry walls provision that utilizes boats of the fisherfolk during inclement weather conditions.

Politiko would love to hear your views on this...
Spread the love
Tags: Aurora, Department of Public Works and Highways, flooding
Disclaimer:
The comments posted on this site do not necessarily represent or reflect the views of management and owner of POLITICS.com.ph. We reserve the right to exclude comments that we deem to be inconsistent with our editorial standards.