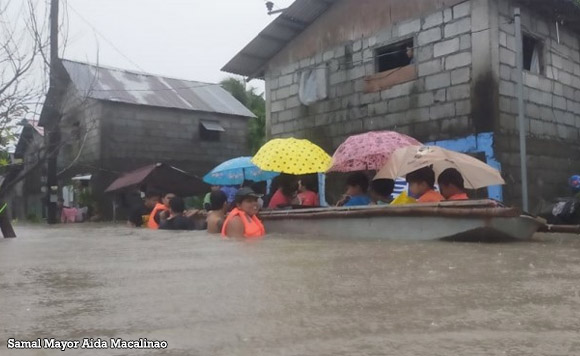 Two towns and the provincial capital of Balanga City in Bataan have declared a state of calamity due to flooding brought on by torrential monsoon rains in the past week, officials said.

As many as 48,000 residents in the three LGUs were affected by floods that swamped several barangays.

On Thursday, Hermosa municipal officials approved the resolution declaring the state of calamity in the town on the recommendation of Mayor Antonio Joseph Inton.

The Municipal Disaster Risk Reduction Management Office began rescue and relief operations in Barangays Cataning, Almacen, A. Rivera, Culis and Palihan, according to a report in Punto Central Luzon.

Some 15 barangays in Hermosa were submerged by one to six feet deep flooding, officials said.

Politiko would love to hear your views on this...
Spread the love
Tags: Bataan, flooding, monsoon, state of calamity
Disclaimer:
The comments posted on this site do not necessarily represent or reflect the views of management and owner of POLITICS.com.ph. We reserve the right to exclude comments that we deem to be inconsistent with our editorial standards.