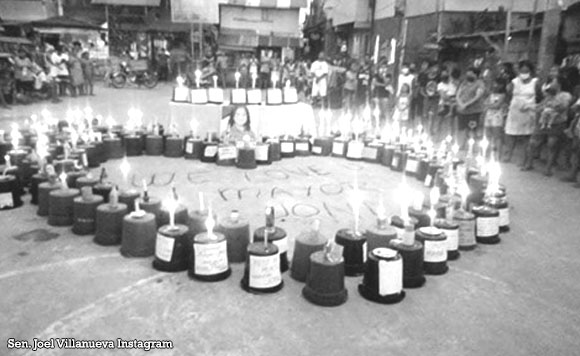 CITY OF MALOLOS, Bulacan – A new mayor has taken over the reins of Bocaue town dubbed as the “fireworks capital of the country” after the demise of Mayor Eleanor “Joni” Villanueva-Tugna last Thursday.

Erstwhile Vice Mayor Jose Santiago Jr. became the mayor by succession, taking his oath before Governor Daniel Fernando on Monday, as witnessed by Darwin David, provincial director of the Department of the Interior and Local Government (DILG).

“Based on the Local Government Code, the vice mayor automatically assumes the mayoralty post once the local chief executive dies and only has to take his oath of office before the governor of the province,” Darwin said.

He said that the first councilor of the Sangguniang Bayan will then assume the vice mayoralty post and the vacant councilor position will come from the political party of the late mayor as recommended by the party chairperson.

Lt. Col. Rizalino Andaya, Bocaue police chief, told the Philippine News Agency that the burial scheduled for the late mayor is yet to be finalized.

Villanueva-Tugna died at the St. Luke’s Hospital in Global City, Taguig City last Thursday due to “sepsis secondary to bacterial pneumonia.” She was 42.

Last Friday night, mourning residents of Bocaue town lit nearly 40,000 candles in black buckets on the roads and streets of the 19 villages.

The buckets were pasted with various pictures of the late mayor while others had farewell messages such as “We love you mayor. Paalam (Goodbye)”, “Thank you, Mayor Joni. May you rest in peace”.

The buckets were the ones that the late mayor used for the more than 40,000 relief good packs distributed by the local government during the implementation of the enhanced community quarantine (ECQ) and modified ECQ. (PNA)

Politiko would love to hear your views on this...
Tags: Bocaue, Mayor Eleanor "Joni" Villanueva-Tugna, Vice Mayor Jose Santiago
Disclaimer:
The comments posted on this site do not necessarily represent or reflect the views of management and owner of POLITICS.com.ph. We reserve the right to exclude comments that we deem to be inconsistent with our editorial standards.