40 rebel returnees in Aurora to receive P20K in livelihood assistance 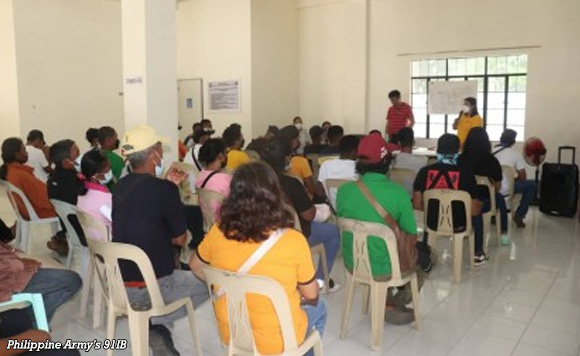 The Philippine Army is set to provide livelihood assistance to some 40 former rebels of the Communist Party of the Philippines-New People’s Army (CPP-NPA) in Aurora province to “help them restart their lives,” according to a Philippine News Agency report.

The report quoted Lt. Col. Julito B. Recto Jr., acting commander of the Philippine Army’s 91st Infantry (Sinagtala) Battalion under the 7th Infantry (Kaugnay) Division, as saying that the former rebels will get P20,000 each under the Sustainable Livelihood Program (SLP) of the Department of Social Welfare and Development (DSWD).

Recto said a livelihood orientation was conducted Thursday in Dipaculao town to help the former rebels go back to the community with a proper source of income.

Ulyssis Arevalo, DSWD Regional Office 3 focal person on Executive Order No. 70 or the whole-of-nation approach to end local communist armed conflict, said the assistance will be received by the former rebels at the soonest possible time through the joint efforts of the concerned agencies from local government units here.

“This activity is part of the National Task Force to End Local Communist Armed Conflict (NTF-ELCAC), a mandate under Executive Order 70 by President Rodrigo Duterte. We will immediately process their papers in order for them to receive the allotted aid,” Arevalo said in the PNA report.

Politiko would love to hear your views on this...
Spread the love
Tags: Aurora, livelihood assistance, rebel returnees
Disclaimer:
The comments posted on this site do not necessarily represent or reflect the views of management and owner of POLITICS.com.ph. We reserve the right to exclude comments that we deem to be inconsistent with our editorial standards.