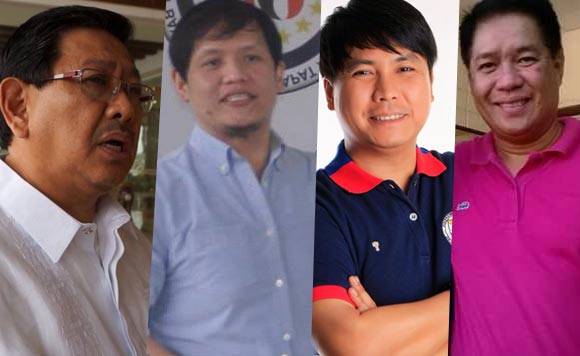 The four mayors vehemently denied their alleged involvement in illegal activities following their inclusion in a list of narco-politikos released by the National Police Commission (Napolcom).

In a statement, Pamintuan said: “The Napolcom and PNP should be careful in releasing names of alleged narco-politicians so as not to unnecessarily impugn the character of innocent individuals. The war on drugs cannot be won through press releases but through painstaking government work, information gathering and validation, and related activities.”

Pamintuan, who is also national president of the League of Cities of the Philippines, said he and all the 145 city mayors in the country remain very much supportive of President Rodrigo Duterte’s campaign against illegal drugs.

Khonghun, in denying the allegation, showed in his Facebook account a plaque of recognition awarded by Philippine National Police Chief, Director General Ronald dela Rosa, that Subic was the best implementor of “Oplan Double Barrel” in the region on their campaign against illegal drugs in August 2016.

Lacson, for his part, said this was the first time he got involved in such a fiasco.

Chief Supt. Amador Corpus said the move was in compliance with the Napolcom resolution to strip the four local officials of their supervision powers over the police units and the withdrawal of their deputation as Napolcom representatives following their alleged involvement in illegal drugs.

The Napolcom resolution states that the local officials were allegedly “engaging in acts inimical to national security which negate the effectiveness of the peace and order campaign of the government” and are suspected of “providing material support to criminal elements”.

Corpus said the withdrawal of the police security detail was done to ensure an impartial and in-depth investigation on the matter.

He said the police security of Pamintuan reported back to their mother unit while Khonghun’s police security detail was re-assigned to the Regional Holding Unit of PRO3.

The two Tarlac mayors’ police security details, on the other hand, were re-assigned to other stations, he said.

Politiko would love to hear your views on this...
Spread the love
Tags: Agustin, Andres Lacson, Angeles City, Camiling, Concepcion, Edgardo Pamintuan, Erlon Agustin, Facebook account, illegal drugs, Jay Khonghun, National Police Commission, Philippine National Police, president Rodrigo Duterte, Subic, Tarlac
Disclaimer:
The comments posted on this site do not necessarily represent or reflect the views of management and owner of POLITICS.com.ph. We reserve the right to exclude comments that we deem to be inconsistent with our editorial standards.