4 Bulacan towns, city under state of calamity due to ‘habagat’ floods 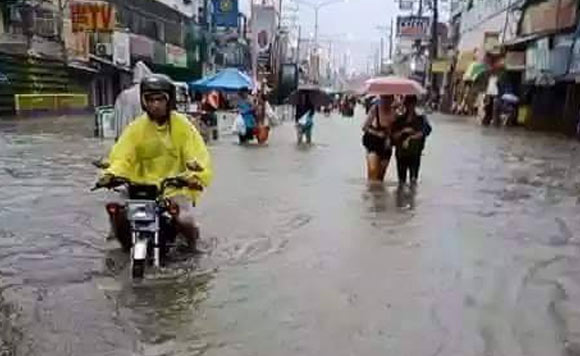 A city and four towns in Bulacan province have been placed under a state of calamity due to the damages caused by floods brought about by the southwest monsoon or “habagat” in the past few days.

Mina Ingusan of the Provincial Public Affairs Office (PPAO) said the local governments of Meycauayan City and the towns of Hagonoy, Paombong, Calumpit, and Marilao declared a state of calamity in their respective jurisdictions.

Ingusan also said the Sangguniang Panlalawigan of Bulacan is pushing for the declaration of a state of calamity for the entire province except for the town of Doña Remedios Trinidad.

The Provincial Disaster Risk Reduction and Management Office (PDRRMO) reported that as of Tuesday, floods induced by the southwest monsoon rains have caused some PHP41.85 million in initial damage to farms and fishponds in the province.

A total of 1,096.10 hectares of fishponds in the province were affected by the floods, causing an estimated PHP33,812,517 in losses to 532 fishpond operators.

Edgardo Cabigao, barangay chairman of Caliligawan in Malolos, a coastal village along Manila Bay, confirmed that most of the fishponds in the coastal areas of Bulacan had been affected by the floods since Sunday.

“Most if not all of the fishponds in the coastal villages of Masile; Babatnin; Namayan; Pamarawan; and Kaliligawan, all in the City of Malolos, were submerged up to knee-high from its dikes,” Cabigao said.

The latest PDRRMO report showed that the number of villages in the province that went under water were City of Malolos, 48 barangays; Calumpit, 29; Hagonoy, 20; Bocaue, 16; Paombong, 14; Guiguinto 13; and Marilao with 11 barangays inundated from one-half foot to six feet deep.

A total of 47 evacuation centers were also established in these flood-affected towns and cities, the PDRRMO said.

So far, no untoward incident has been reported by the PDRRMO. (PNA)

Politiko would love to hear your views on this...
Spread the love
Tags: Bulacan province, Calumpit, damages, Doña Remedios Trinidad, habagat, Hagonoy, local governments, Marilao, Meycauayan City, Mina Ingusan, Paombong, Provincial Disaster Risk Reduction and Management Office (PDRRMO), Provincial Public Affairs Office (PPAO), Sangguniang Panlalawigan, southwest monsoon
Disclaimer:
The comments posted on this site do not necessarily represent or reflect the views of management and owner of POLITICS.com.ph. We reserve the right to exclude comments that we deem to be inconsistent with our editorial standards.