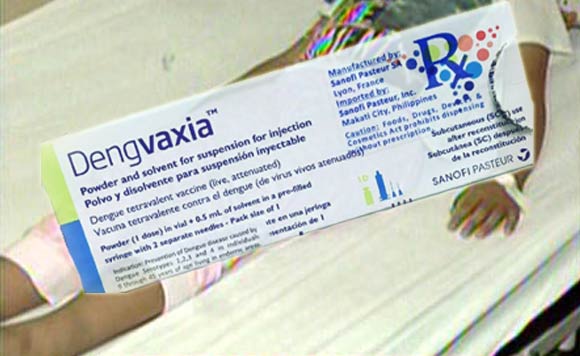 Another fatality who received the Dengvaxia vaccine was recorded in Pampanga province last week.

According to reports, a 12-year-old girl from the island village of Sapang Kawayan in the town of Masantol had died after inoculation with the dengue vaccine since December last year.

The girl received a single dose of the dengue vaccine on June 14, 2016, at San Esteban Elementary School in neighboring town of Macabebe.

This raises to 3 the number of schoolchildren in the province whose deaths were linked to Dengvaxia doses.

The girl received a single dose of Dengvaxia on June 14, 2016, at San Esteban Elementary School in Macabebe town. On Jan. 14, she got fever and cold and later experienced headache and vomiting. A day later, she was admitted to a government hospital on Jan. 17. She died on Jan. 19.

According to the Department of Health (DOH), more than 47,300 schoolchildren in the province were inoculated with Dengvaxia under the 2016 dengue immunization drive.

After the controversy, the DOH has since launched programs to monitor and assist recipients of the vaccine nationwide.

Politiko would love to hear your views on this...
Spread the love
Tags: Candaba, Dengvaxia vaccine, Department of Health (DOH), Guagua, Macabebe, Masantol, Pampanga province, San Esteban Elementary School, Sapang Kawayan, schoolchildren
Disclaimer:
The comments posted on this site do not necessarily represent or reflect the views of management and owner of POLITICS.com.ph. We reserve the right to exclude comments that we deem to be inconsistent with our editorial standards.