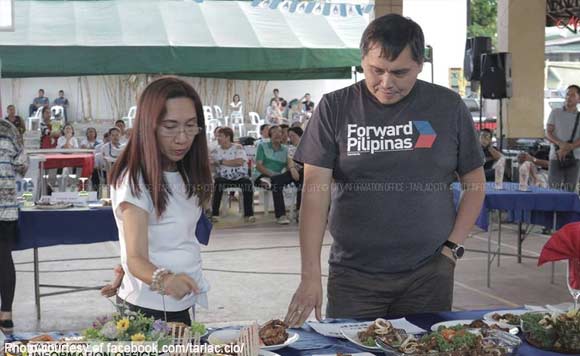 The free Adobo Ambula Feast held at the Tarlac Plazuela was part of the celebration of the 20th Cityhood Anniversary of Tarlac City.

It aimed to showcase the culinary skills of Tarlaqueños in the cooking of the most famous Kapampangan dish, said Mayor Cristy Angeles, who initiated the festival.

“The festival also serves as a venue to express the unity of Tarlaqueños and their deep desire for change and progress,” she added.

Various schools and organizations in the city competed in the adobo cooking competition, which was organized by the City Tourism Council and Tarlac City Tourism Office. #

Politiko would love to hear your views on this...
Spread the love
Tags: 20th Cityhood Anniversary of Tarlac City, ayor Cristy Angeles, City Tourism Council and Tarlac City Tourism Office, free Adobo Ambula Feast, Kapampangan dish, Tarlac, Tarlac City 2nd Adobo Festival, Tarlac Plazuela
Disclaimer:
The comments posted on this site do not necessarily represent or reflect the views of management and owner of POLITICS.com.ph. We reserve the right to exclude comments that we deem to be inconsistent with our editorial standards.