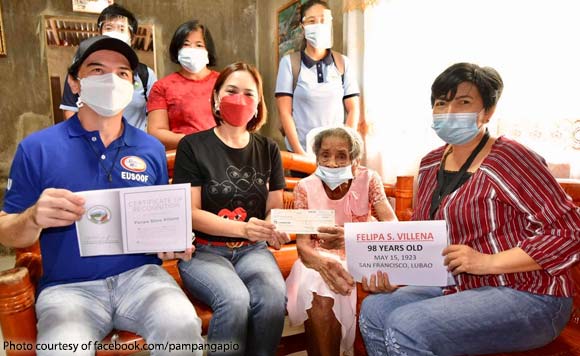 Three more nonagenarians residing in the second district of Pampanga have received a P100,000 incentive from the provincial government for their longevity, according to officials.

The seniors, all aged 95 and above, received the cash gift during a turnover ceremony led by Pampanga Board Member Fritzie David-Dizon and Provincial Social Welfare and Development Office (PSWDO) Head Elizabeth Baybayan, officials said.

The cash gift is part of the privileges and benefits provided by the provincial government to senior citizens under Ordinance 683. The program was implemented by virtue of provincial Ordinance 683, series of 2014, or “An Ordinance Enacting the Senior Citizen Code of the Province of Pampanga.”

At first, only those who have reached 100 years old were entitled to receive the incentive.

But the Pampanga government relaxed the rules to include those aged 95 years old and above.

Ordinance 647 or the Senior Citizens Code was then amended by the Provincial Board, lowering the age of the beneficiaries from 100 to 95 years old.

Politiko would love to hear your views on this...
Spread the love
Tags: incentive, nonagenarians, Pampanga
Disclaimer:
The comments posted on this site do not necessarily represent or reflect the views of management and owner of POLITICS.com.ph. We reserve the right to exclude comments that we deem to be inconsistent with our editorial standards.