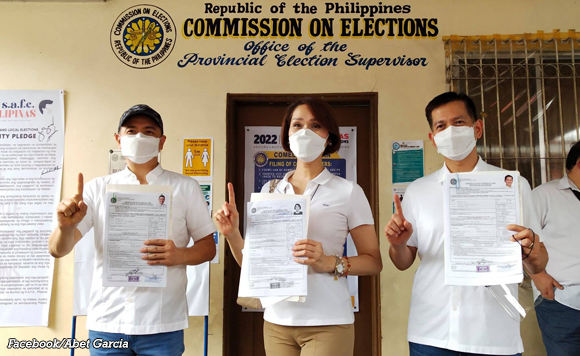 Three Garcia brothers and a Roman sister-brother pair are seeking reelection or new elective posts in the 2022 elections.

Bataan Governor Albert Garcia and his brother, Rep. Joet Garcia, who are both on their last terms, switched positions in their certificates of candidacy filed with the Commission on Elections.

Their brother, Balanga City Mayor Francis Garcia will go for his third and last term.

Bataan Rep. Geraldine Roman is also going for her final term in the House of Representatives, while her brother, lawyer Tonyboy Roman is seeking a seat in the Sangguniang Panlalawigan.

Though they belong to different political parties, the Garcia and Roman clans are considered allies, according to a Sun Star Pampanga report.

Politiko would love to hear your views on this...
Spread the love
Tags: Bataan Governor Albert Garcia, Halalan 2022, Mayor Francis Garcia, Roman
Disclaimer:
The comments posted on this site do not necessarily represent or reflect the views of management and owner of POLITICS.com.ph. We reserve the right to exclude comments that we deem to be inconsistent with our editorial standards.