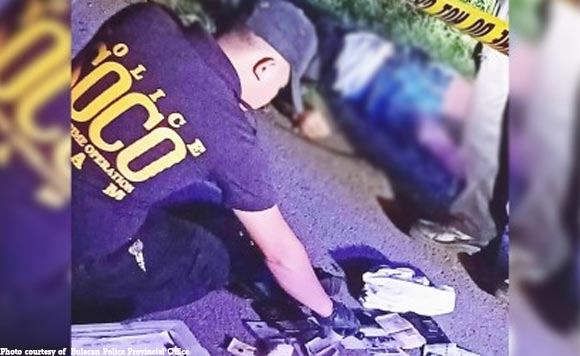 Police Col. Chito G. Bersaluna, chief of the Bulacan Police Provincial Office, identified those killed in the buy-bust operations in Santa Maria town on Friday and the City of San Jose Del Monte on Saturday as Ljel Fabros, Christian Marcos, and Marlon Cagampang.

“After the consummated transaction, the suspects sensed the presence of police, they immediately alighted from their motorcycle and fired guns toward the operatives, who retaliated. A gunfight ensued as the suspects were trying to escape in the grassy portion of the road that caused their deaths,” he said.

The other suspect, Cagampang, was also killed after a shootout with members of the Drug Enforcement Team in Barangay San Gabriel, Santa Maria town at 1:30 a.m. on Friday.

“Cagampang was involved in the rampant selling of illegal drugs in the areas of barangays Poblacion, San Gabriel, and Caysio, all in Santa Maria,” Bersaluna said.

Recovered from the suspect were a loaded caliber .45 pistol with serial number P1737468, 16 heat-sealed plastic sachets of shabu, a motorcycle without plate number and PHP500 marked money.

Meanwhile, nine other drug suspects were arrested by the police in the towns of Balagtas, Bustos, and Bocaue and in the City of Malolos, also Friday and Saturday.

Confiscated from the suspects during the operations were 16 plastic sachets of shabu, two folded white paper of dried marijuana leaves, assorted drug paraphernalia and buy-bust money.

The arrested suspects and confiscated pieces of evidence were brought to Bulacan Provincial Crime Laboratory Office for appropriate examination.

Criminal complaints for violation of Republic Act 9165 (Comprehensive Dangerous Drug Act) are now being prepared for filing in court against the suspects. (PNA)

Politiko would love to hear your views on this...
Tags: anti-illegal drug operations, Bulacan Police Provincial Office, City of San Jose del Monte, drug pushers
Disclaimer:
The comments posted on this site do not necessarily represent or reflect the views of management and owner of POLITICS.com.ph. We reserve the right to exclude comments that we deem to be inconsistent with our editorial standards.