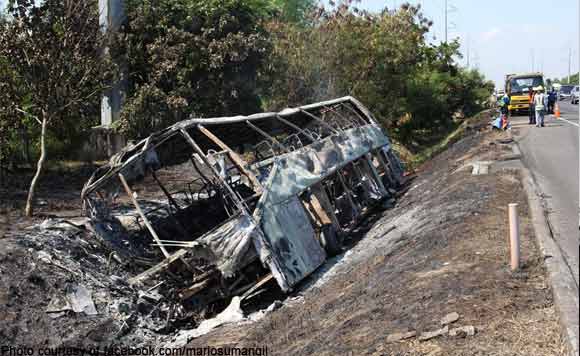 Three people were charred to death and some 20 others were injured during a collision between a passenger bus and a truck in Concepcion, Tarlac late Tuesday night, Tarlac police said.

The accident occurred at the Subic Clark Tarlac Expressway (SCTEX) before midnight in Barangay Sto. Nino.

The truck was allegedly loaded with acetylene and LPG tanks when it hit Five Star bus bound for Dagupan City.

The fatalities were yet to be identified, while investigation into the incident has been ongoing. #

Politiko would love to hear your views on this...
Spread the love
Tags: Barangay Sto. Nino, Concepcion, Dagupan City, Subic-Clark-Tarlac Expressway (SCTEx), Tarlac, Tarlac police
Disclaimer:
The comments posted on this site do not necessarily represent or reflect the views of management and owner of POLITICS.com.ph. We reserve the right to exclude comments that we deem to be inconsistent with our editorial standards.