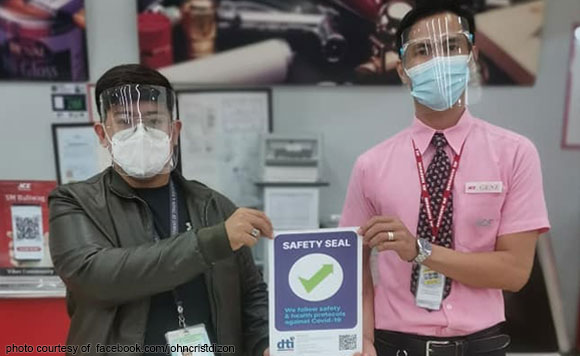 More and more businesses and retail establishments in Central Luzon are applying for the Safety Seal over the past few weeks, according to the Department of Trade and Industry (DTI).

The DTI’s Consumer Protection Division reported that 359 establishments had applied for the certification as of the end of July, from only 135 applications last June.

A total of 251 have already been approved by DTI Central Luzon.

“From the 251 Safety Seal certifications issued by the DTI 3 offices, 72 were establishments in Bulacan, 69 were in Pampanga, 50 in Tarlac, 26 in Zambales, 18 in Nueva Ecija, 10 in Bataan and 6 in the province of Aurora,” DTI Regional Director Leonila Baluyut said in a Philippine Information Agency report.

The rest have pending applications, she added in the PIA report.

“By applying for and getting the Safety Seal, establishments are assuring consumers and stakeholders that the government has inspected the office, shop or establishment and it has been found to be compliant with the minimum public health standards,” Baluyut said.

Politiko would love to hear your views on this...
Spread the love
Tags: Central Luzon, Department of Trade and Industry, DTI safety seal
Disclaimer:
The comments posted on this site do not necessarily represent or reflect the views of management and owner of POLITICS.com.ph. We reserve the right to exclude comments that we deem to be inconsistent with our editorial standards.