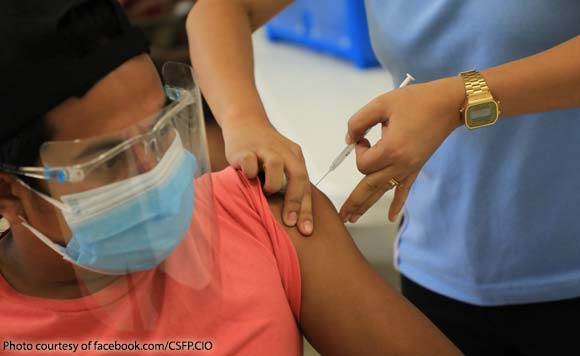 Health officials of San Fernando City have administered the second jab of the Sinovac vaccine to 214 health workers prioritized for inoculation.

The city health office said the second dose of the vaccine was given to medical front-liners on the priority list on Tuesday.

They were among the 1,765 health sector workers who received the first jab last March, officials said.

The city government is awaiting the delivery of more vaccines to resume the rollout of the program.

Officials said they were also in talks with stakeholders about the establishment of a second vaccination site to speed up the inoculation drive.

Politiko would love to hear your views on this...
Post Views: 4
Spread the love
Tags: health workers, San Fernando City, Sinovac jab
Disclaimer:
The comments posted on this site do not necessarily represent or reflect the views of management and owner of POLITICS.com.ph. We reserve the right to exclude comments that we deem to be inconsistent with our editorial standards.