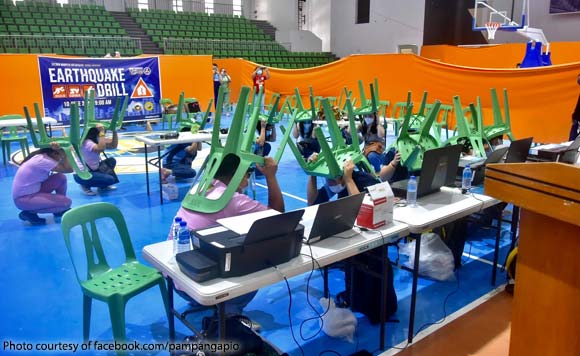 Residents of Pampanga province queueing up for the Covid-19 vaccine recently took part in an earthquake drill as part of the effort to build preparedness among the public.

According to officials, more than 200 residents who had lined up for the vaccine rollout joined the earthquake drill conducted at the vaccination site of the Bren Z. Guiao Convention Center.

This was in line with the participation of the Pampanga provincial government in the Second Quarter Simultaneous Earthquake Drill nationwide.

Provincial Disaster Risk Reduction and Management Officer (PDRRMO) Angelina Blanco led a safety orientation on what to do and what not to do during disasters such as earthquakes.

In April 2019, a 6.1 magnitude earthquake was felt in many parts of Central Luzon including Pampanga, leaving a number of fatalities and destroying some properties.

Politiko would love to hear your views on this...
Spread the love
Tags: Covid-19, earthquake drill, Pampanga
Disclaimer:
The comments posted on this site do not necessarily represent or reflect the views of management and owner of POLITICS.com.ph. We reserve the right to exclude comments that we deem to be inconsistent with our editorial standards.