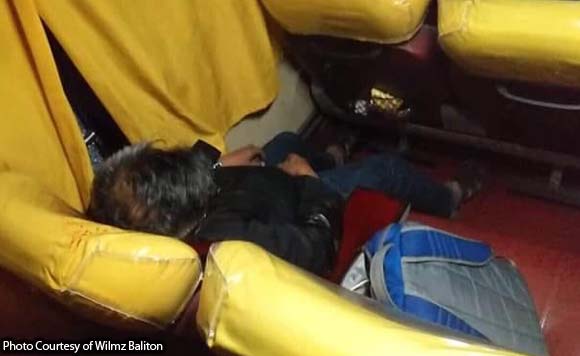 Meanwhile, PRO-2 released the facial composite sketches of the two suspects in the killing of Malayao.

Based on the description of witnesses, the gunman was wearing a hoodie and a face mask with fair complexion, medium built and has a height of about 5 ft. 4 inches to 5 ft. 6 inches. He is between 25 and 30 years old.

The other suspect, meanwhile, who served as the driver of the getaway motorcycle was wearing yellow shirt and brown shorts, has a light built and fair complexion and has a height of 5 ft. 3 inches to 5 ft. 6 inches, with age ranging from 20 to 25 years old.

Witnesses said Malayao, 49, was on board a Victory Liner bus, which made a stop at CCQ bus stop in Aritao town at 2:30 a.m. on Wednesday, when a gunman reportedly boarded the bus, approached the sleeping victim, and shot him at close range.

The victim died on the spot while the gunman fled on board a black motorcycle.

Malayao was on his way back to his hometown in San Pablo, Isabela from Manila when the attack took place.

The victim attended formal peace negotiations in Europe as a consultant from Cagayan Valley prior to the cancellation of the peace talks. He also acted as one of the spokespersons of the NDFP Negotiating Panel in Europe.

He represented the NDFP in peace forums abroad and in the country, along with government negotiators Secretary Silvestre Bello III, lawyer Angela Librado Trinidad and others.

Malayao, a former political prisoner, spent more than four years in jails in Cagayan and Isabela provinces and was freed after he had been acquitted of the charges against him. (PNA)