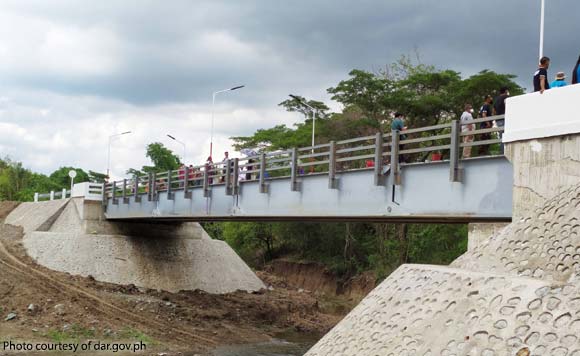 Two newly-built bridges in Peñaranda town in Nueva Ecija are expected to benefit farmers in the municipality, officials said during the formal opening of the infrastructure projects last Tuesday.

The first bridge is the San Mariano-Barrio Militar Bridge, a 40.20- meter bridge located in Barangay San Mariano that connects this municipality to Palayan City, the capital of Nueva Ecija, while the second is Diwalaan Bridge, which is located at the the boundaries of Barangays Las Piñas and Sinasajan spanning 17.20 meters, the report said.

The bridges were constructed in collaboration between the Department of Agrarian Reform (DAR), the Department of Public Works and Highways (DPWH), and the local government unit under the Tulay ng Pangulo Program to support agrarian reform beneficiaries, Castriciones said.

The completed projects have a combined cost of P14.11-million financed through the foreign-assisted projects, he added.

The DPWH is the implementing agency while the Peñaranda local government will take care of the bridges’ sustainability, operation, and maintenance, the official said.

Politiko would love to hear your views on this...
Spread the love
Tags: Agrarian Reform, Nueva Ecija, Secretary John Castriciones
Disclaimer:
The comments posted on this site do not necessarily represent or reflect the views of management and owner of POLITICS.com.ph. We reserve the right to exclude comments that we deem to be inconsistent with our editorial standards.