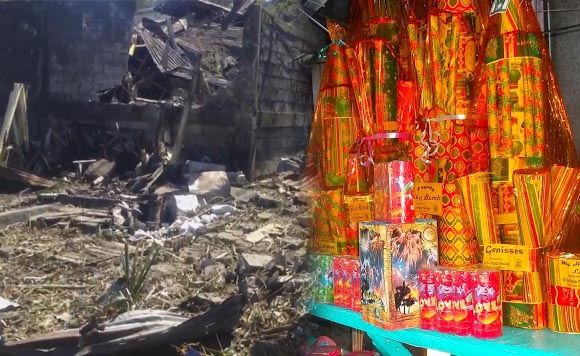 Police identified the fatalities as Ashley Mayo, 2 and Bryle Mayo, 5.

Three of the injured were identified as Mary Grace Mayo, 28; Ryan Magnai, 21 and Raymund Muntante while the two still unidentified persons sustained only minor injuries.

The factory owner was identified as Wilfredo Alonzo, 49, a resident of the above-mentioned locality.

Investigators also learned that the license to manufacture of the owner already expired last June 14.

Police and arson probers have yet to determine the cause of the blast and why there are minors in the place where skyrockets are being made.

Politiko would love to hear your views on this...
Spread the love
Tags: Ashley Mayo, Barangay Pulong Buhangin, Bryle Mayo, Bulacan, Mary Grace Mayo, Raymund Muntante, Ryan Magnai, Sitio Bangka-bangkaan, Sta. Maria, Wilfredo Alonzo
Disclaimer:
The comments posted on this site do not necessarily represent or reflect the views of management and owner of POLITICS.com.ph. We reserve the right to exclude comments that we deem to be inconsistent with our editorial standards.