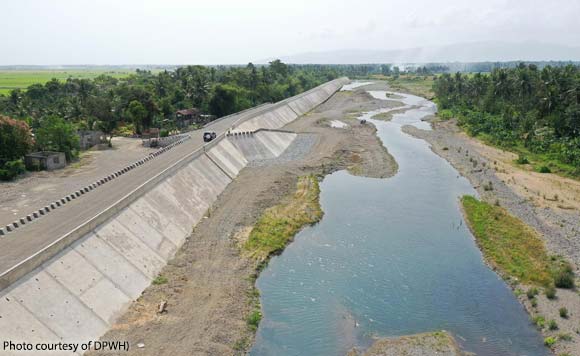 Weeks ahead of the rainy season, two flood control projects in Maria Aurora and Baler towns in Aurora province, according to the Department of Public Works and Highways.

“Aurora is a coastal province and there are flood-prone areas particularly those in low-lying villages along its major rivers,” DPWH Aurora District Engineer Roderick Andal said in a Philippine Information Agency report.

“Thus, to mitigate the effects of inundations to these flood-prone areas, our office implemented, and just recently completed two river control projects amounting to P87.6 million,” the engineer added.

The Dimanpudso project involved the construction of concrete river protection works on steel sheet piles foundation with a paved ramp.

On the other hand, the Buhangin flood control project was intended to prevent flooding due to the barangay’s proximity to the Bugnoyas and Pudoc creeks, as well as the Dimanibong and Aguang rivers.

“The completion of the construction of Buhangin 1 Flood Control has eased the fear of residents from inundation as their lives, properties and crops are now secured from the possible devastating effects that flood damage can have on their livelihood and lives,” Andal said.

Politiko would love to hear your views on this...
Post Views: 14
Spread the love
Tags: flood control projects, Maria Aurora
Disclaimer:
The comments posted on this site do not necessarily represent or reflect the views of management and owner of POLITICS.com.ph. We reserve the right to exclude comments that we deem to be inconsistent with our editorial standards.