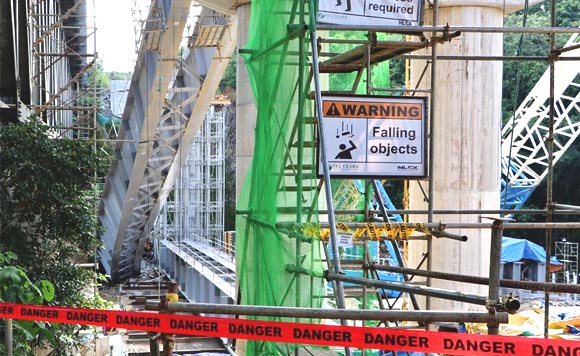 Two construction workers died while three others were wounded after a steel framework fell off a column on a portion of the Subic Freeport Expressway (SFEx) expansion project.

Wilma Eisma, chair and administrator of the Subic Bay Metropolitan Authority, said in a statement that the two workers were pinned underneath the frame weighing 180 tons.

The steel framework is part of the structure of the bridge under construction.

The SBMA chair said she is still awaiting details from NLEX Corporation, the police and other authorities to shed light on the incident.

“We hope that a thorough investigation would uncover the cause and prevent a similar disaster from happening again,” Eisma said.

Two of the wounded have been released by the James L. Gordon Memorial Hospital (JLGMH) in Olongapo City while the third is still under observation.

Work on the P1.6-billion SFEX expansion project was halted as a result of the accident.

Politiko would love to hear your views on this...
Spread the love
Tags: Subic, Subic Bay Metropolitan Authority, Subic Freeport Expressway
Disclaimer:
The comments posted on this site do not necessarily represent or reflect the views of management and owner of POLITICS.com.ph. We reserve the right to exclude comments that we deem to be inconsistent with our editorial standards.