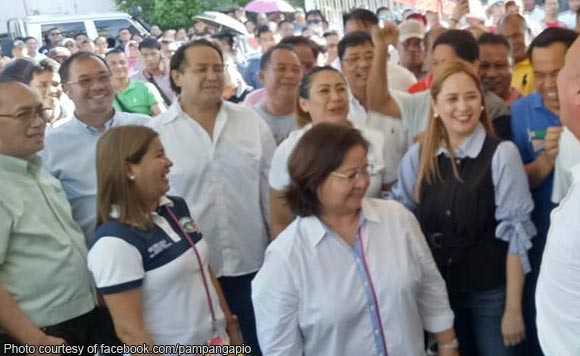 The mother-and-son tandem in the leadership of Pampanga province will likely remain after next year’s polls, albeit in swapped positions.

Governor Lilia Pineda filed her candidacy on Friday for the position of vice governor for the May 2019 elections, while her son, Vice Governor Dennis Pineda, is gunning for the gubernatorial position.

The politikos, who are running under the Kambilan Local Party, filed their candidacies at the provincial capitol in San Ferdnando City.

The Pinedas were brought into the national spotlight after Lilia’s husband, Rodolfo, popularly known as “Bong,” was dragged into the ‘jueteng’ scandal several years back.

The filing of certificates of candidacy for next year’s mid-term polls ends on Oct. 17.(END)

Politiko would love to hear your views on this...
Spread the love
Tags: Governor Lilia Pineda, Kambilan Local Party, Pampanga province, San Ferdnando City, Vice Governor Dennis Pineda
Disclaimer:
The comments posted on this site do not necessarily represent or reflect the views of management and owner of POLITICS.com.ph. We reserve the right to exclude comments that we deem to be inconsistent with our editorial standards.